Get information on open safety recalls and service campaigns released since 1999 for Toyota, Lexus and Scion vehicles intended for sale or sold in the U.S., U.S. Territories, and Mexico using our quick and easy recall and campaign lookup below.

One or more recall items are ready for repair. Please click the Find A Dealer button below to schedule your service at a dealer near you.

OR
Safety Recalls
Your vehicle has been issued a Takata Airbag Safety Recall. Call 888-324-3502 to speak with an agent and schedule an appointment for your FREE repair today.
Service Campaigns:

There are no open Safety Recalls or Service Campaigns for this vehicle.

An error occurred during your request... You can refresh this page to retry. We apologize for any inconvenience.

If you have completed a Campaign, but are experiencing concerns with your vehicle, please contact your local Toyota, Lexus, or Scion dealer for an inspection. Should you require additional assistance, please refer to the Contact Us section at the bottom of this page.

Safety Recall Campaign
In accordance with the requirements of the National Traffic and Motor Vehicle Safety Act, when Toyota, Lexus, or Scion has determined that either a defect which relates to motor vehicle safety or a noncompliance with a Federal Motor Vehicle Safety Standard exists in your vehicle, a Safety Recall Campaign is launched. The specified inspection and/or repair will be performed at no charge to the vehicle owner.

Special Service Campaign
A Special Service Campaign is the Toyota, Lexus, or Scion owner notification program to inform customers about specific product or technical issues for which inspection and/or repair is being offered without an expiration date. These issues are typically customer satisfaction initiatives. The described service will be performed at no charge to the vehicle owner.

Scroll to Expanded Recall Info
Update - 3/2016, Expanded to include 2008 model year Corolla/Corolla Matrix and 2008-2010 model year Lexus SC 430 vehicles
Toyota has initiated Safety Recalls for certain Toyota and Lexus vehicles equipped with Takata Front Passenger Airbag Inflators and one Toyota model equipped with a Takata Driver's Airbag Inflator. The subject vehicles are equipped with airbag inflators which may have been manufactured in such a way as to have a potential for the intrusion of moisture over time. Depending on the circumstances, this could create excessive internal pressure when the airbag is deployed and cause the inflator to rupture. In the event of an inflator rupture, metal fragments could pass through the airbag cushion material, striking the vehicle occupants and potentially resulting in serious injury or death.
If you have questions or concerns related to this important safety recall, please contact your Toyota/Lexus dealer or the Customer Assistance team whose contact information is noted in the Frequently Asked Questions links below. These links will also provide the most up-to-date information about this important safety recall.
Parts are currently available for repairs. We request that you contact your local dealer for the remedy as soon as possible.
Driver Airbag Inflator
Toyota has initiated a nationwide Safety Recall action related to the Driver's dual-stage airbag inflators in 2004 – 2005 model year RAV4 vehicles. This is the only Toyota model in the United States and United States Territories involving Driver's airbag inflators. If your vehicle is involved, the Driver's airbag inflator will be replaced at no charge to you at an authorized Toyota Dealer.
Nationwide Safety Recall F0L:
Toyota Vehicles Frequently Asked Questions
Front Passenger Airbag Inflator
Toyota has initiated two separate Safety Recall actions related to Takata Front Passenger airbag inflators on various Toyota models and one Lexus model. One is a nationwide recall, DSF (Toyota)/DSC (Lexus), and the second recall is regional, focused on the Gulf Coast and other areas within the United States and United States Territories with consistently high absolute humidity, E04 (Toyota)/ELG (Lexus).
A vehicle may be included in either the nationwide Takata inflator recall activity or the regional inflator recall. In both recalls, if your vehicle is involved, the front Passenger airbag inflator will be replaced at no charge to you at an authorized Toyota Dealer or authorized Lexus Dealer for the Lexus model involved.
Only the models and model years listed below are equipped with the inflators subject to these recalls. 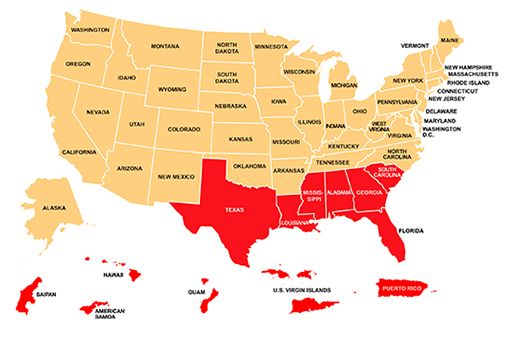 Regional Safety Recall E04/ELG:
(Front Passenger)
High absolute humidity is related to higher temperature, southern coastal areas and is not the same as high relative humidity. Test results from the inflators recovered from consistently high absolute humidity areas have shown a possible elevated risk for Passenger airbag inflator rupture.
If your vehicle is not located in, or has not ever been registered in, the areas with consistently high absolute humidity (such as, Florida, Hawaii, Puerto Rico, Gulf Coast and US Territories), your vehicle will be included in the nationwide safety recall.
We will notify you directly by first class mail when parts are released in your area and invite you in to your local dealer for the remedy. However, if your vehicle is part of this safety recall and you have not yet received a letter indicating parts are available, you may at this time schedule an appointment with your dealer to have the remedy completed. All owner mailings will be completed by June 30, 2016.
Please remember, the front Passenger airbag is designed to inflate only in certain moderate to severe crashes. If you are operating a vehicle involved in these Safety Recall actions, you should locate passengers in the rear seating positions to minimize risk.
For Customer Assistance Team contact and the most up to date information, please refer to the document links below.
SAFETY RECALL:
Areas of High Absolute Humidity Front Passenger Airbag Inflator

A customer service representative will reach out to you.

We were unable to process your request, but we'll get it working again soon.